A unique infrastructure in the world
The cross-Channel Fixed Link is the only way to cross the stretch of water between Great Britain and continental Europe in total safety, 365 days a year, 24 hours a day.

The Channel Tunnel is the longest undersea tunnel in the world: its section under the sea is 38km long. It is actually composed of three tunnels, each 50km long, bored at an average 40m below the sea bed. They link Folkestone (Kent) to Coquelles (Pas-de-Calais).

Eurotunnel Shuttles, Eurostar and freight trains runs on two monodirectional single-track tunnels. They are connected every 375 metres by cross-passages to a service tunnel, a road tunnel for the maintenance operations and eventually the evacuation of passengers.The two undersea cross-overs brings flexibility to operations as trains can pass from one railway tunnel to the other, in particular during the maintenance periods which take place at night time. In normal operations, Eurotunnel Shuttles use the south tunnel in the France–UK direction, and the north tunnel when travelling from the UK to France.

The two rail tunnels are 7.6m in diameter and 30m apart. Each rail tunnel has a single track, overhead power line (catenary) and two walkways (one for maintenance purposes and the other on the side nearest the service tunnel for use in the event of an emergency evacuation). The walkways are also designed to maintain a shuttle upright and in a straight line of travel in the unlikely event of a derailment.

The service tunnel is 4.8m in diameter and lies between the two rail tunnels 15m away from each of them. The service tunnel allows access to maintenance and emergency rescue teams and permit the evacuation of passengers in the event of an incident. It also serves as access to the ventilation of the entire infrastructure. It is therefore kept in a state of air overpressure and remains safe from fumes in case of fire in one of the railway tunnels, for an optimum safety.

A transport system was specifically conceive for the service tunnel in which vehicles drive on the left. This multi-functional system is used for mainteannce operations and in case of incidents, with the aim of reaching the scene of an incident in the minimum time. There are two types of vehicles used in the service tunnel: some unique wire-guided STTS vehicles (service tunnel transport system) made of two driving cabines at each end and a central module dedicated either to the emergency services or to the maintenance as well as some electric and diesel-powered cars for maintenance purposes.

Fully connected from its construction, the Channel Tunnel comprises more than 36,000 state-of-the-art and other systems installed in the three tunnels and linked to many equipments.

The track in each rail tunnel has two continuously welded rails laid on precast concrete supports (sleeper blocks) embedded in the concrete track bed.
Cooling pipes, fire mains, signalling equipment and cables are fixed to the sides of the tunnels. The cooling system is fed by the cooling plants at Shakespeare Cliff in the UK and Sangatte in France.

The 25,000volts overhead catenary supplies traction power to the shuttles as well as to other trains using the Tunnel, e.g. Eurostar and rail freight trains. The catenary is divided into sections, so that maintenance work can be carried out in stages. Electrical power supplying the tunnels, drainage pumps, lighting and the trains, is provided by substations on each side of the Channel. In the event of loss of power from one side, the entire system can be supplied from the other side.

Some fixed equipment, such as the lighting system or the opening of the cross-passage doors between the rail tunnels and the service tunnel can be switched on from the control Rail Control Centre (RCC) or manually in the tunnels. Various fire-protection systems, including the four Safe stations in the rail tunnels, and other detection systems are installed at points along the length of the tunnels and in the technical rooms of the Tunnel.

Principal items of the fixed equipment

Mechanical equipment in the tunnels

The Fixed Link installations in pictures 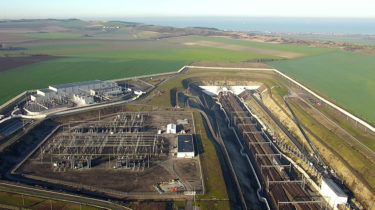 It is 50.5km long and comprises an undersea section of 38km, still the longest in the world. 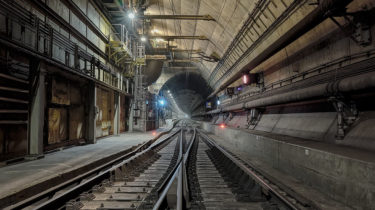 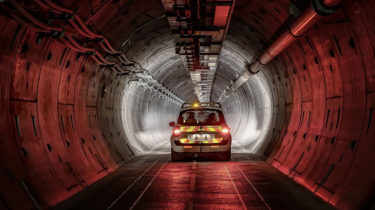 34
The service tunnel lies between the two rail tunnels

It allows access to maintenance and safety operations as well as, if necessary, for the evacuation of passengers. 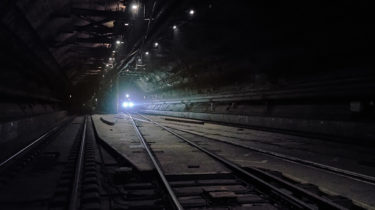 The Folkestone and Coquelles terminals Covering an area of 650-hectare and 30-km long perimeter, the Coquelles terminal, near Calais, is one of the largest land-travel complexes in Europe (the equivalent in size to an international airport). As a result of the marshy nature of the soil, the whole area had to be covered with a 50-cm thick layer of sand before construction could begin in order to ensure a good base for the foundations. As the Coquelles terminal size is by far bigger than the Folkestone terminal, it comprises the many maintenance buildings for the infrastructure and the rolling stock, including the F46, the longest railway mainteannce building in the world. With its 838m long, it allows technicians to work on a complete Shuttle without having to disconnect and reform each section, a long and costly task. The Folkestone terminal, located at 8 km from the undersea tunnels at Shakespeare Cliff, covers a 150-hectare area, i.e. about one third of the area of the French terminal. Its construction required first to stabilise the site in order to prevent the sides of the adjacent escarpment from subsiding. The level of the whole site was then raised to level out the soil and eliminate steep slopes.

Both terminals are easily reached through their direct access to the motorway network in the UK (M20) and in France (A16). They both represent the loading and unloading points for vehicles travelling on Eurotunnel Shuttles. Access to the terminals is made through tolls, for passenger vehicles and for trucks. Once the self-check-in operations are done, customers get to the border controls, carried out by British and French police and customs. All controls are carried out before departure in order to enable customers to continue their journey directly on the motorway network on the other side of the Channel.

Passengers then have the opportunity to take a break at the Victor Hugo terminal in Folkestone or at the Charles Dickens terminal in Coquelles (shops, restaurants, play area, etc) or to drive towards the allocation areas before reaching the 12 platforms area, each 1-km long. Vehicles can then load on board Le Shuttle for cars, coaches, camper-vans, caravans, motorcycles,.. or on Le Shuttle Freight for trucks.

There are several different areas on each terminal – passenger, freight, control centres, administration and maintenance buildings. Traffic control on the terminals is managed by a road Terminal Control Centre (TCC). On top of the many IT systems enabling vehicles to be recognised upon arrival at the self check-in tolls and the many screens linked to about a hundred cameras, the TCC have a direct view over the allocation lanes for vehicles.

The entire Eurotunnel transport system is controlled from the RCC (Rail Control Centre). There are two centres, one on each terminal, and each can take turns to take over control of the system. The RCC manages all rail traffic (trains and shuttles) on the Concession, i.e. in the tunnels and on the terminals.

The Road Traffic ControL Centres (TCC) manage, on each terminal, the customers’ vehicles of the Passaenger and Freight services from their arrival just before check-in to loading onto the Shuttles as well as from their exit from the Shuttles to the exit road towards the M20 and 16 motorways.